When was the last time you spent one-on-one time with the Chief Technical Officer of a $500 million company?

The National Convergence Technology Center (CTC) manages a video series entitled “A Day in the Life” in which IT technicians and executives offer students their perspectives on the IT workplace. The hope is that hearing directly from a successful IT worker (rather than their professor) in a video interview may deliver a stronger, lasting impact on students.

The latest subject of “A Day in the Life” is Matt Glover, CTO for a health and wellness company Le-Vel. Matt explains that his job is to bridge “emerging technologies with existing technologies” to support the goals and capabilities of the company. 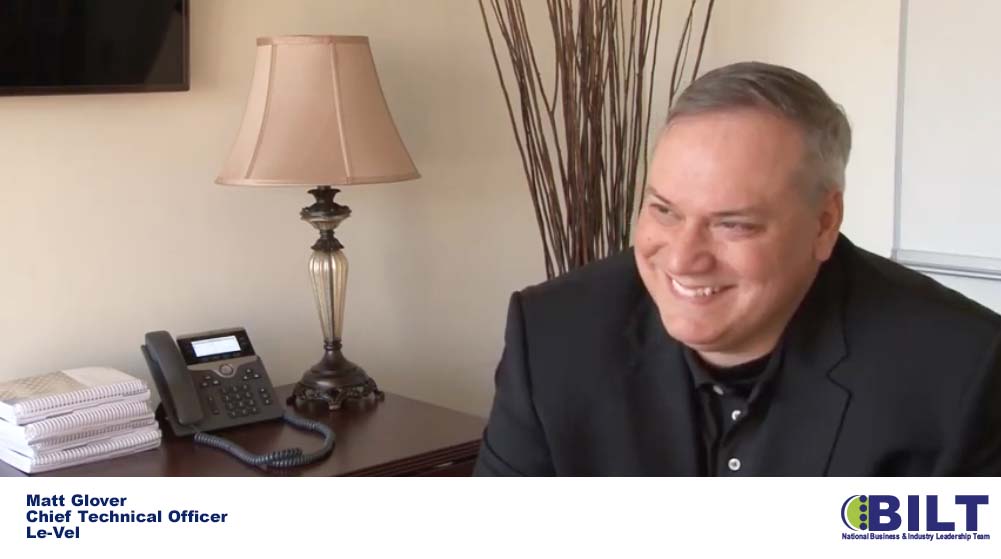 Below are 11 quotes from Matt’s interview that might make an impact on IT students when considering the reality of entering the IT workforce. Click here to watch Matt’s interview in full. The YouTube description offers a “table of contents” index with timestamps if you’re interested in specific questions.

I am the first CTO for Le-Vel, so this afforded me a unique situation where I was able to actually build the team from the ground up.  There was no other technology team in place. That was a very exciting opportunity for me to rethink how IT can be more effective, more efficient, leaner, and execute faster than traditional IT shops.

The number one skill, in my opinion, is integrity. It’s the foundation on which everything is built, so if you lack integrity you can’t, as a leader, build a team that has morals or practices good ethics.

Be very personable and likable.  Nobody likes somebody who’s humdrum.  They want to see people who are excited and engaged to be there.

I had a bunch of really major product releases that were going off, but at the same time I had three different team members who had pretty severe tragedies in their families.  So as a leader you have to weather the transition and allow the company to be successful even when you have things that might be burdening.

If you have a bad attitude in any job, you’ve essentially doomed not only your own career to failure, but your entire team’s motivation and willingness to succeed on your behalf.

You have to be able to get people to be motivated, to yearn for those distant shores, so collectively we as a team can build a boat to get there. Whether that’s a new technology, an engineering feat that’s in front of you, or simply a new… way of interacting with your customer.  You never know what that technological thing is or what that distant shore needs to be for your team, but inspiring them to do that is a critical path in everything that you do.

Talk to industry professionals – people whose job you’d like to do.  Even if it’s an entry-level industry professional.  Figure out whether that role is something you’re actually going to like.  Because if you don’t like it you’re not going to be able to sustain a positive attitude in that job.

Technical skill gets you the job.  “You know how to do something? That’s great.  I’ll hire you to do that one thing.”  Soft skills allow you to keep your job.  And not only does it allow you to keep your job, but it makes it so you can get promoted within that same company or, even more so, to other companies and get bigger and better jobs.  The technical is great that you have it but if you can’t marry that with your soft skills – your ability to communicate, your ability to influence in a positive way and put yourself in win-win situations and those around you in win-win situations – you’re not going to go very far.

In technology as a whole, details are important.  You can’t just get it a little bit right. Especially if you’re a developer, your syntax is off on that line of code, it breaks.  So, there is a lot of attention to detail.

Set your goals and don’t listen to the people around you if they’re telling you “you can’t.”  Because I’m telling you, you can.