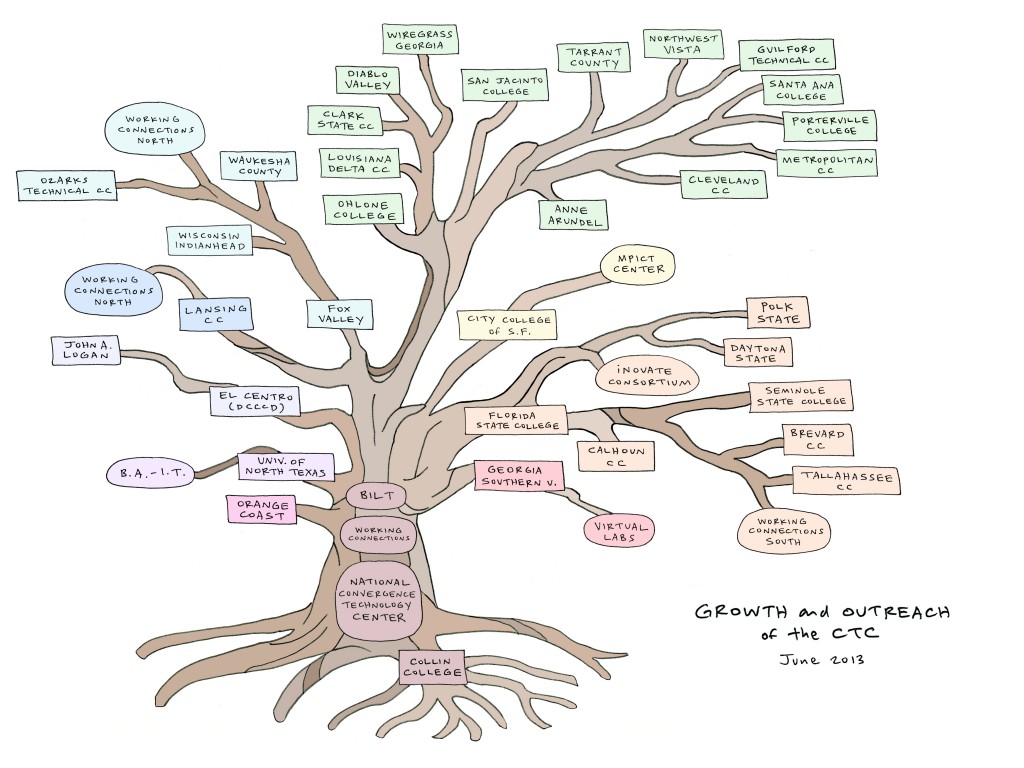 The Convergence College Network (CCN) began with the National Convergence Technology Center (CTC) and just a handful of partner colleges.  Back then the CCN was called the Mentored College Network.  But as the CTC added more and more colleges, it became necessary to rethink the model.  Rather than mentor each college one-on-one, the CTC evolved into a network – led by a mature core Advisory Board – in which best practices were shared among many.   The name was subsequently changed.  Today there are 30 CCN members in 14 states.

The National CTC recently looked for a way to show this evolution as part of an internal evaluation exercise.  A “tree-like” diagram was discussed as one possible method to chart this sort of growth.

This tree illustration shows how Collin College provides a root system supporting the CTC.  Colleges connected through the CTC are illustrated on the tree as rectangular shapes, and programs stemming from the network are shown as ovals.  The colors of the tree labels help show connections. That is, the color of the “leaf” college labels will match the colors of “branch” college labels that provide mentoring for them. You can see that Orange Coast College, University of North Texas, El Centro College, Lansing Community College, Fox Valley Technical College, Florida State College at Jacksonville, and Georgia Southern University are partner colleges promoting the growth and outreach of the network.  The green “leaf” labels belong to those CCN member schools unconnected to any of the partner colleges.

What began as an academic experiment has unexpectedly become a useful tool in both promoting the CCN and explaining how it’s structured.  And our tree works just like the ones in nature: always growing and evolving to reflect the climate around it. Check back with us to watch how our tree continues to change!