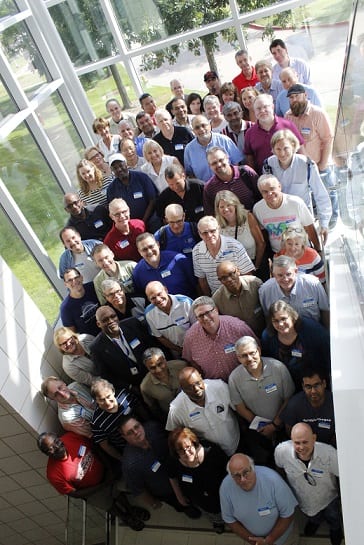 CCN members from schools across the country gather during a 2016 summer annual meeting.

Four times a year, the National Convergence Technology Center (CTC) hosts a meeting of its Convergence College Network (CCN) community of over 60 community colleges and universities from 24 states across the country.  These meetings are one of the prime benefits of membership in the CCN in that they provide the perfect platform for resource sharing, peer networking, and best practice dissemination.

At a recent CCN meeting, attendees received a briefing on upcoming CCN web meetings and webinar trainings, discussed some of the online resources the CTC provides, debated some of the challenges of engaging business councils and faculty to work together to strengthen IT curriculum and meet the realities of the workforce, and conducted the usual sort of “housekeeping” items such as grant reporting.

But the last 30 minutes of the meeting was devoted to faculty sharing.  In a survey of a CCN member, the sharing of resources and practices between schools was reported as one of the most valuable elements of the quarterly meetings.  At this particular meeting, several CCN faculty members shared what they learned at the HI-TEC conference this past summer in Utah.  The hope was that these short reports would allow those who didn’t attend to take advantage of those who did.

Specifically, CCN members discussed the impact of conference sessions on…