As a part of the National Convergence Technology Center (CTC) featured blogs, we would like to introduce IT students attending our Convergence College Network (CCN) schools. The CCN is a select cohort of community colleges and universities from across the country that connects IT educators with a wealth of resources to enhance their programs. In this month’s CCN Student Feature, we’re interviewing Blake Becker, a senior at University of North Texas (UNT) who is currently pursuing a Bachelor of Arts degree in Information Technology. 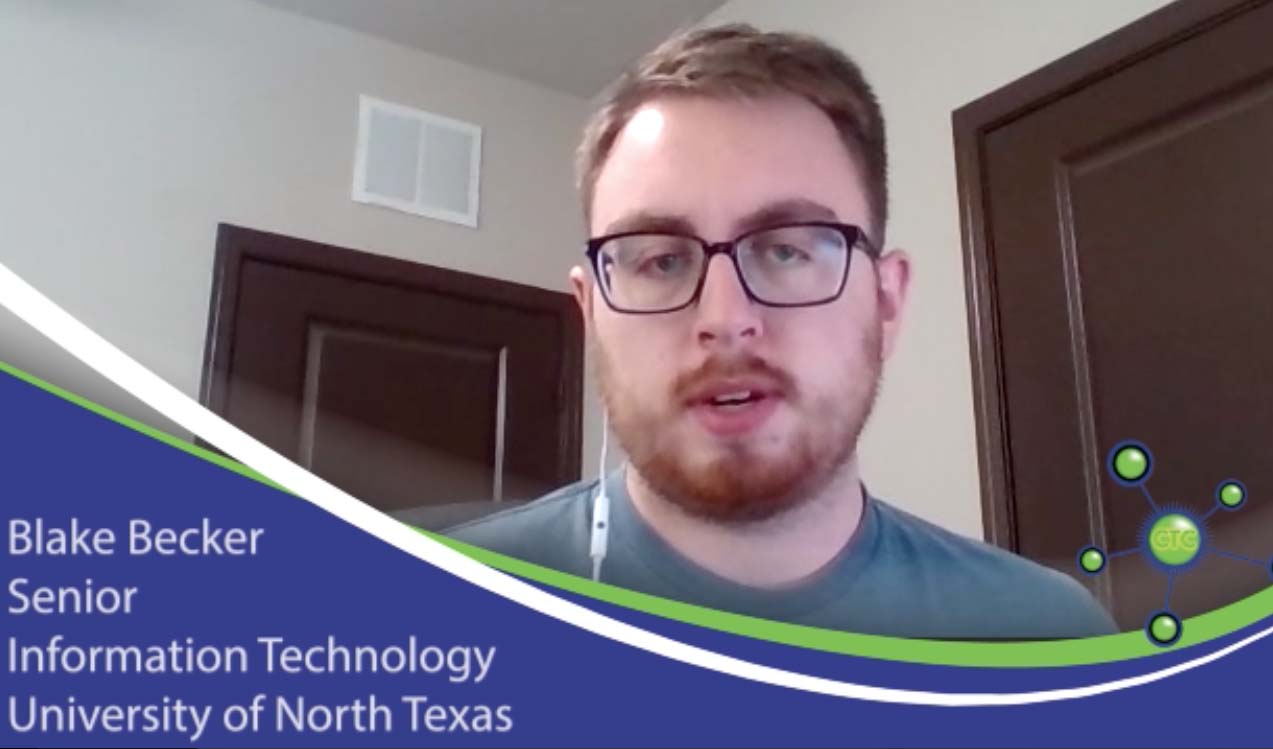 Blake started taking classes in computer and IT while in high school. He, like many other students, grew up with technology in the home. “I enjoyed playing around with them [computers], learning how they worked and learning what I could do with computing,” Blake said.

Prior to attending UNT, Blake attended Hill College, a community college in Hillsboro, Texas for dual credit courses during his junior and senior year of high school. After high school, he was able to transfer his credits to UNT. “The transfer process was pretty simple. I went to their registrar office and filled out a couple of forms to get those credits sent over to UNT and that was really the transfer process. There were only two courses and luckily both transferred over.”

When Blake originally enrolled at UNT, his major was Computer Science; however, he quickly discovered that there are so many pathways to learning computers and understanding how they function, which resulted in him changing majors and discovering what best fit him. “Originally, I enrolled as a major in computer science, took a couple of courses and after a couple of classes, realized that programming really wasn’t my thing. I could do it, but it’s not something I find fulfilling, and it wasn’t something I wanted to do my entire life.” Blake learned about the IT department while researching other computer classes. “Instead of writing programs, it was more about using systems, which was a lot more my speed. It has broadened my horizons in knowing how computers run. UNT courses are still a lot of programming-based even in the IT program. It’s a lot of programming fundamentals, I now have a greater grasp on how programs work, what might be happening behind the scenes. It has made me more aware as a technician.”

This year, Blake participated in UNT’s Capstone Program, a two-semester program that gives students an opportunity to experience working with industry partners and installing real-world systems. The program is required for all BA-IT majors. Blake and his team’s, Team Duo, project was called “Circles U App Continuation.” The project was a continuation from last year, it entails developing a social media application that allows individuals to create and join groups based on that individual’s physical location. Click here to learn more about the project.

Currently, Blake is employed at UNT as a student employee Helpdesk Support Technician. He helps the facilities with IT-related calls and remote issues for the Risk Management Department. “Mostly, it’s standard technician work – help people understand the software they’re using, helping with printer issues, and we do some hardware troubleshooting, but not a lot. It’s mostly diagnostics.”

When asked, “What would you be doing if you weren’t involved in IT,” Blake believes he would still be doing something with computers because that was all he ever worked on. As far as his short-term and long-term goals? After graduating he would like to get a job in IT and gain as much experience as possible. He, also, plans to start obtaining some certifications. Long-term, his goal is to be a specialist at whatever he decides to do in IT. “You never know how things are going to go in this field.” To hear Blake share more about his IT experience click here for the video.