Edge computing has been defined as “fog computing” which is a misconception. Edge computing is actually established on small cloud computing (computers?) and in order to process information through our everyday devices such as cell phones, laptops, and IoT sensors, cloud computing is “decoupled” into a network of micro data centers, which is defined as fog computing. The fog is the network made up of those virtual micro data centers. Unlike the traditional centralized “rack and stack” servers, edge computing moves the processing closer to the end devices. (I’m rewriting this last sentence because I’m not quite sure if it’s accurate as written – if you disagree, change it back.) 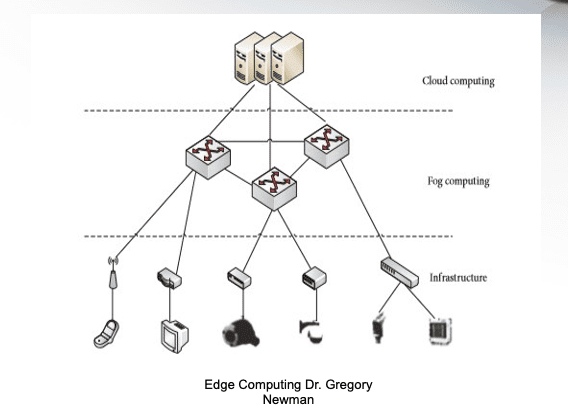 Cisco’s new model moves away from physical data centers and towards more software-based data centers and virtualization. Web browsers such as Microsoft Edge, for example, are processing closer to the users. By 2022, Chicago will require 80,000 micro data centers (90,000 in Los Angeles) to process all of edge devices.

Edge computing is introducing more opportunities and at the same time increasing security issues – not only do you have to secure the data but also physically secure the small edge devices. Gregory also noted that the infrastructure to support this edge computing has yet to be built. However, with faster processing comes the creation of more markets and job opportunities.

How should IT Faculty get IT students ready for a world of edge computing?

o Students can’t work on a RAN, but there are technologies we can add to curriculum
o Programming is a must – students have to be able to code (Python C++ SQL R C#)
o Understand the concepts of routing – it’s all virtual now
o There may be new protocols in addition to TCP/IP
o Students also have to understand virtualization and virtual network functions (VNFs)
o Security will be a major element – students need to learn not just about securing the apps, but also about physically securing the small edge data centers in places like a bus station or a football stadium
o There are different storage environments – object based and also traditional SAN-based block storage
o Students need a good foundation in cloud computing as well