For several years now, the National Convergence Technology Center (CTC) has publicized a special Twitter hashtag in conjunction with its annual Summer Working Connections professional development training event.  This past July, however, for the first time ever, the National CTC took this social media strategy one step further by creating a “photo booth” space in the break room.  A branded blue backdrop (plastic tablecloth with a large format color printed logo) was hung on the wall and props – some purchased, some made in-house using wooden cooking skewers as the “sticks” – were stacked on a nearby table.  Announcements were made at lunch.  Attendees visited in the break room at least three times each day: once when they arrive to get coffee, then twice more for breaks in the morning and afternoon.  It was all very hard to avoid.

This photo booth element was launched alongside a social media contest that promised prizes in four categories: Best Selfie, Most Creative Post , Most Posts, and “Track Spirit” (for the track classroom that proved most engaging online).  And while many attendees posted photos from their classrooms, most of the event’s “buzz” surrounded the photo booth.  It was that new element that put attendees into the act that seemed to energize the social media strategy.

There are many tools and tactics to measure success on Twitter and, to be honest the National CTC staff is still learning.  (One lesson: attendees with protected, private Twitter accounts can’t be tracked or counted or included in hashtag searches.)  But any way you slice it, the social media strategy this year was a big success.  Internal metrics of the National CTC’s Twitter account (@mobileCTC) show that during the week of Summer Working Connections, the 79 tweets posted by CTC staff made over 6600 impressions.  That’s a lot of sharing and retweeting – the two biggest tweets that week showcased Collin College’s Mobile Go Center trailer (2000+ impressions) and our special “open house” of the Internet of Things classroom lab (450+ impressions).  A Twitter search further reveals that the #summerWC2018 hashtag was used 55 times.  And a search via TalkWalkers.com shows that #summerWC2018 was mentioned 304 times by 11 different authors during that week.  Clearly, it’s a strategy that may be repeated again for 2019.

Below is a collage of almost every photo booth photo posted via the National CTC’s Twitter page. 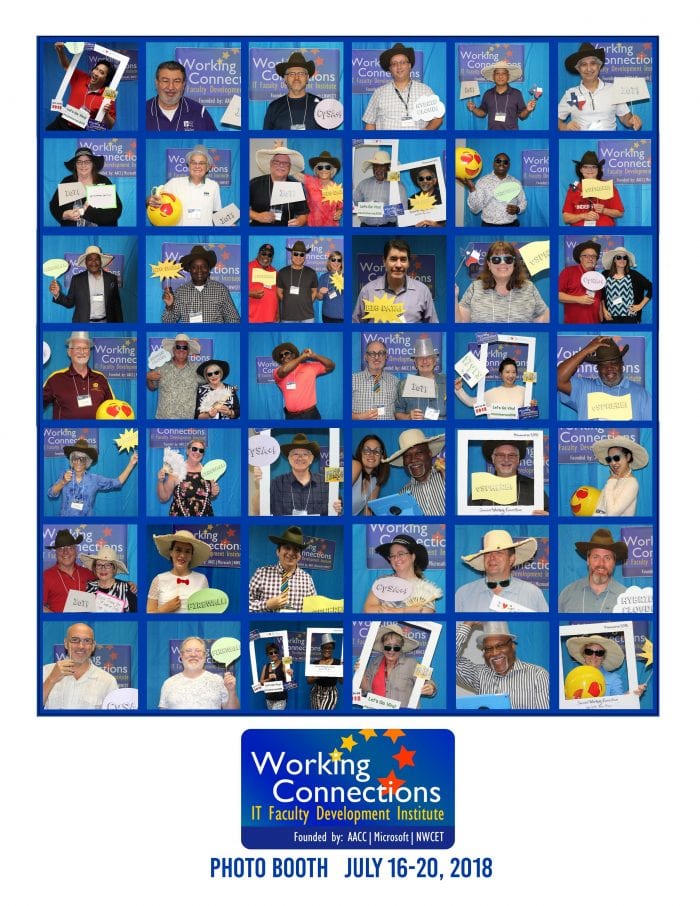