As a part of the National Convergence Technology Center (CTC) featured blogs, we would like to introduce IT students attending our Convergence College Network (CCN) schools. The CCN is a select cohort of community colleges and universities from across the country that connects IT educators with a wealth of resources to enhance their programs. In this month’s IT Student Feature, we’re interviewing Ali Qureshi, an alumnus from Houston Community College (HCC) in Houston, Texas. 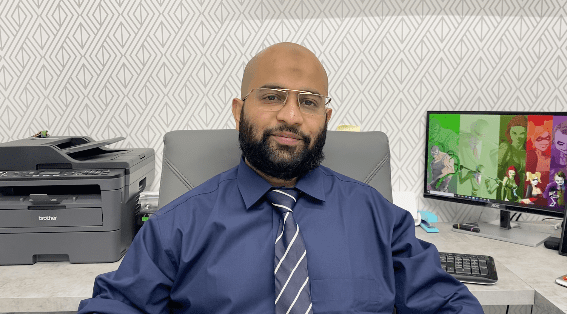 “It has always been my goal to pursue a career in IT,” said Ali Qureshi, alumnus of Houston Community College.

Ali became interested in IT while watching a friend play a video game called “Doom” in the late 90s. According to him, he was more interested in learning how the game was created versus how to play the game. As a result, he developed a passion for IT and has since completed an Associate’s degree in Cyber Security and recently obtained his CCNA and CompTia Security+ certifications at HCC.

Because of his passion for IT, Ali received an Alpha Beta Gamma award from the National Society of Leadership (NSLS) and participated in Palo Alto’s Secure the Future competition – a nationwide cybersecurity competition designed to address the challenges faced with how to make decisions regarding the protection of operational assets. The first stages of the competition was online, the final presentation was at Palo Alto Headquarters in Silicon Valley. He was selected as one of the top five nationwide in this competition.

Currently, Ali is pursuing a CISSP certification at HCC and working as a Network Administrator at Done Right, LLC, a company that is owned by one of the most prestigious jewelers in the world. He manages the company’s website and social media maintenance as well create new ways to make the process easier. He also manages the network security and make sure all systems are operating properly. To view his interview and its entirety click here.