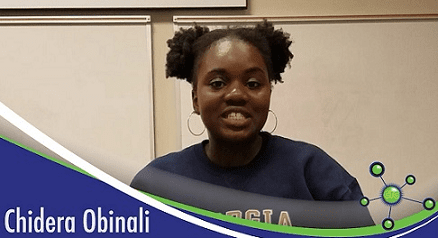 “Don’t be afraid to ask questions, even if you think it’s the dumbest question in the world. Someone else is probably thinking it too…”

As a young girl, Chidera Obinali got her first taste of technology through playing an online virtual pet environment game, known as NeoPets. “They have little pages where you code HTML and CSS within NeoPets,” Chidera explained. She made friends all over the world through the game. “I would join guilds that were all based on creativity, expanding what we liked and what we wanted to be able to share with everyone.”

She would manipulate the codes of the game which eventually led to a type of mini business as people would request her to make buttons and other graphics for them. “I would use Photoshop 7 to make them and other programs like Gimp,” Chidera said. “The excitement and the happiness I had once I finished making it that drove me towards technology and web page development because I enjoyed what I was doing, especially once I accomplished something that was kind of challenging.”

Chidera now attends Georgia Southern University and is pursuing a Bachelor’s of Science Degree in Information Technology with a focus in web and multimedia applications. “One of my upperclassmen in high school mentioned Georgia Southern having a graphic design program. I didn’t want to just focus on the artsy side of it. I wanted to learn the front end and back end parts about making a website and stuff like thatbecause, you know, there’s more to it.” Chidera wanted to attend a school where she could learn both web and web foundations. She later learned that Georgia Southern offered an IT program that had a specialization in web and web foundations. “I thought it was perfect, and they also had a graphic design program in case I changed my mind.”

Chidera has since completed an internship through the Georgia Lottery Corporation, where she worked with International Game Technology (IGT) on the quality assurance team. “I worked with all the engineers there testing different programs and games using a lot of in house technology that I cannot disclose because I signed a waiver,” Chidera said. “It was really fun and really an enlightening experience because even though I’m web development based, it was focused on all sorts, and I had to wear a lot of hats.” Through the internship, Chidera had to do some infrastructure, networking and some UIX development.

Through her journey into IT, Chidera feels that nothing can be learned without passion for the subject you are pursuing. “It’s really taught me that a lot of things that we learn in life are really self-taught. People can hand you the materials and open the book for you, but they can’t force you to understand it,” Chidera explained. “You have to be proactive and really force yourself to get into it, be interested to actually understand it.”

According to Chidera, Georgia Southern taught her to take an initiative instead of just “getting by” like in high school. “High school was not hard for me, it was basic foundations, but when I came here, I kind of hit a roadblock. I realized IT isn’t just computers and switches,” Chidera said. “You really have to put your mind to sync up to it.”

Georgia Southern also provided clubs and organizations where Chidera could further her understanding, such as the Association of IT Professionals. “Even if I never had a professor, personally, I could talk to them, communicate with them and ask them questions. I think that’s what I really like about the IT program here, it’s really a big family. There’s always somebody there to help you.”

Chidera is using her knowledge of IT and web development to create her own website and host a portfolio of her past work so that it will be easier to show potential employers projects she has worked on.

Chidera plans to graduate Fall 2018, and her advice to others interested in IT: “Don’t be afraid to ask questions, even if you think it’s the dumbest question in the world. Someone else is probably thinking it too. There are going to be days when you don’t really understand what you’re doing; you might not get it the first try; it might not work; in fact, you might break it, but that’s ok,” Chidera said. “That’s part of technology. There has to be failures to get success, and if you just get it right the first time, it’s not as rewarding.”