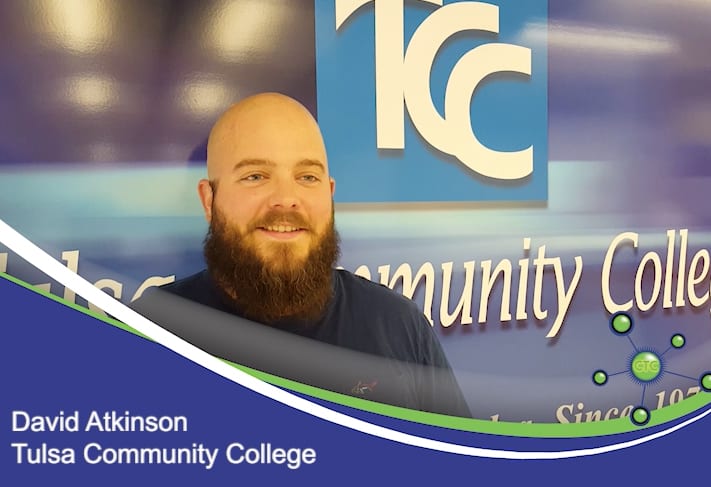 “I knew businesses were transitioning into the cloud for easier access. I knew I could help build, manage, and protect them.” ~ David Atkinson

At Tulsa Community College (TCC) there’s an array of opportunities in the field of information technology from Systems Support Technician to Networking and Cloud Computing. A student can explore the world of information technology in so many ways. The National Convergence Technology Center’s Convergence College Network (CCN) community is happy to showcase IT students by capturing their testimonials. We’re starting the new year with David Atkinson. David is currently pursuing a certification in Cisco Certified Entry Network Technician (CCENT) and Amazon Web Services (AWS) at TCC. To view the interview on CTC’s YouTube channel, please click here.

Prior to attending school for networking, David spent most of his life working outdoors and driving trucks. “There is a point when you want to stop sweating for a living, I wanted to start using my brain instead of my brawn. IT looked like it was the best opportunity that piqued my interest for me to get out of truck driving.” Although David’s first choice was computer programming, he quickly realized that his interest lied elsewhere and that “elsewhere” was networking cloud computing.

Changing his major didn’t affect his progress too much; he was able to transfer some of his classes.  “I knew businesses were transitioning into the cloud for easier access. I knew I could help build, manage, and protect them,” David said. “I looked toward the future and everything was moving toward computers, networking and everything else like that. I figured that I might as well catch the tide while it’s rolling.”

Soft skills played a major role in David’s IT development skills. Coming from an environment where you don’t have to converse with anyone – driving trucks and outdoor work – to one that is steadily encouraging students to utilize their soft skills, David expressed how IT improved his communication skills as a network technician. “It’s (networking technician) a big deal on teamwork and communication, especially, soft skills.” Recently, he accepted a position as a circuit designer at CenturyLink in Tulsa, Oklahoma. At CenturyLink, David says that they work with international teams and part of their duty is to listen and communicate amongst one another to resolve problems.

David felt that working in the TCC classroom labs also helped with his IT development, it gave him real-life scenarios, “Running through labs taught us the basic fundamentals of what a server was, how to access it, and how to configure certain settings. We learned how to enable passwords, access them remotely, and give users certain permissions.”

When asked about his short-term and long-term goals, David plans to receive his certification in CCENT and AWS, then attend a 4-year university and major in cybersecurity. He desires to work for the government in cybersecurity and believes with his experience and work history, he will stand out amongst the best.

The Convergence College Network (CCN) is a select cohort of community colleges and universities from across the country that connects IT educators with a wealth of resources to enhance their programs. Any school that either offers an IT/convergence degree and certificate program – or is considering offering one – can join the CCN.