The National Convergence Technology Center’s Convergence College Network (CCN) community is happy to showcase students in information technology by capturing their testimonials. This month we’re featuring Gregg White, a student and lab assistant at Georgia Gwinnett College in Lawrenceville, Georgia. Gregg begin as a teenager replacing radios in his friends’ cars for $10. He was considered the cool kid in high school because of his knowledge and enjoyment of electronics. Click here to view the complete video. 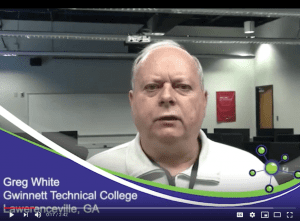 “When I started off in the ‘electronics’ field, information technology was an esoteric term that was not yet a field…” ~ Gregg White

After high school, Greg joined the military and for six years worked as a Carrier Equipment Repairman – maintaining and repairing the electronic equipment that combine many voice/video/data circuits – and as a Microwave System Repairman – one who maintains and repairs microwave radios that transmit video, voice and data. “When I started off in the ‘electronics’ field, information technology was an esoteric term that was not yet a field.  As I worked in the commercial sector, the scope of projects that I worked on became more of a two-way communication ‘Information Technology’ experience,” Greg said.

During his last year in the military, Greg taught a Strategic Microwave Systems Repair class at the Army Signal School. “I was fortunate enough to be selected as the US Army Signal School Military Instructor of the Year 1980.”

In 2005 Cisco purchased Scientific Atlanta and the merger included some changes that gave Greg an opportunity to understand and learn Cisco products: “When Scientific Atlanta (SA) became part of Cisco, the product lines and systems were quickly refocused to work with and over high-speed data networks.  A great deal of Cisco Ethernet switch and Router equipment is used in these networks.  While working on these systems, I became well versed in the setup and use of these Cisco products.”

Greg became interested in networks because of his experience with Cisco and as a result, he decided to take additional networking classes at Gwinnett College to enhance his knowledge and expertise in the field. In addition to taking classes, he assists students in the cybersecurity lab and as part of his long-term goals, he is considering teaching.

Thank you, Greg, for sharing your IT story and we hope our paths cross again in the future.