As a part of the National Convergence Technology Center (CTC) featured blog, we like to introduce IT students attending member schools in our Convergence College Network (CCN). The CCN is a select cohort of community colleges and universities from across the country that connects IT educators with a wealth of resources to enhance their programs. This week, we’re showcasing Diancil Chavez from Cleveland Community College in North Carolina. 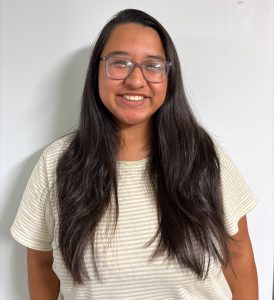 What initially sparked your interest in technology and a career in IT?
It started in high school. I took a field trip with a “Women IT” group to Limestone College. We were touring the college and they talked about computer science. And in one of the rooms, they were showing us an example of a math problem that they are working on. They were going to send it to a person without letting anyone know what the answer to the math problem is and that sparked my interest in computer science. My high school offered College Credit Plus (CCP) classes and we had a representative from Cleveland Community College there advertising the programs they had. I had expressed interest in the IT program that the college had. The classes the representative had registered me for were dual credit classes that I took during my senior year in high school (2020).

What certificates or degrees do you have or are currently pursuing?
In the spring of 2022, I graduated with an Information Technology Network Technician Associate degree. I also graduated with six other skills certificates. I am currently still attending Cleveland Community College to finish my Associate in Information Technology – Cyber Security, which I only need four more credits this school year to earn. There is about only a four-class difference between the networking and cybersecurity degrees, so I decided to take some classes from both associates at the same time.

What’s your current job position in IT?
I am currently working right now as a student tutor helping students with computer skills, networking, and security classes. Last semester, I tutored networking students in our student data center to help get hands-on practice with real live equipment.

How has your school’s IT program prepared you for your career?
There is a lot of hands-on work that we are able to do in the student data center we have at CCC (Cleveland Community College). We also have been able to work with Raspberry Pis and hardware equipment. In my spring semester, I was able to do an internship at Gardner-Webb University. I was able to experience a lot of hands-on work there with IT such as networking, setting up and installing computers with Windows, and doing documentation of my work.

Did your decision to pursue IT serve as an inspiration for others – either in your family or among your circle of friends – to follow you into IT?
The decision to pursue IT did serve as an inspiration to a friend. They had seen the types of work I was completing and were interested in the classes I was taking and wanted to follow the same career path. They decided to enroll in Cleveland Community College to study and receive an associate in Network Technician as well.

What is your advice to other students?
My advice to other students would be to not be afraid to try and explore anything in IT since it is so broad. There is not one specific career in IT. I learned that there are a lot of different niches within networking and cybersecurity. Whenever I was first introduced to computer science classes I saw that it was mostly engineering and programming. At first, I was not sure what I was expecting when I started classes for computer science, but when I got into it, I realized that I did not like programming much. But if it was not for the opportunity of taking dual credit classes in high school, then I would not have known that programming was not my strongest strength. I would also tell students to not be afraid to ask questions about anything to their instructors, colleagues, or anyone. It is best to get as much information as you can and inform yourself and in doing so you will increase your knowledge and understanding of the IT world.