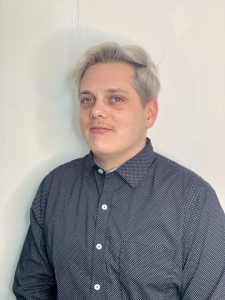 As a part of the National Convergence Technology Center (CTC) featured blog and videos, we would like to introduce IT students attending our Convergence College Network (CCN) schools. The CCN is a select cohort of community colleges and universities from across the country that connects IT educators with a wealth of resources to enhance their programs. This week, we’re showcasing Mathew George from Cleveland Community College, Shelby, NC.

In the early 90s, computers were gradually becoming a household commodity and Mathew was born during this expansion. As a result, he became intrigued to learn the logistics of it all. “I’ve always been able to use a computer but never understood how it all worked. The curiosity is what drew me to a career in IT.”

The IT program at Cleveland Community College provided Mathew with hands-on training to prepare him for the IT industry. “They have given me hands-on experience and that is how I learn the best,” says Mathew.

As many have noted, Mathew says his salary has increased because of his knowledge of IT: “My IT degree has doubled my salary and I am not even finished with both of my degrees.”

He doesn’t feel he has encouraged family members to pursue IT, but he has sparked an interest in family members returning to school to pursue their dreams. His advice to other students is “Even when it gets hard, do not give up. Communicate with your instructors and they will be more than willing to help you succeed.”

Thank you, Mathew, for sharing your IT story with the CTC. We hope you the very best in all your endeavors!