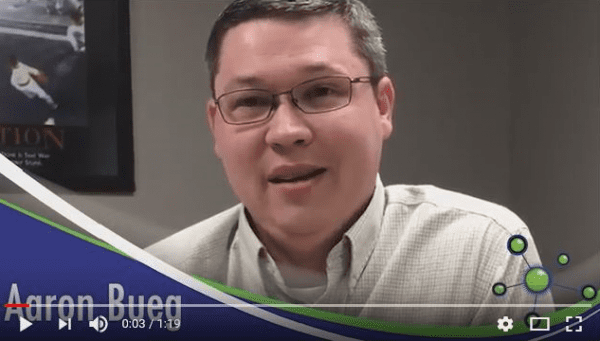 I honestly don’t see myself leaving this department or this institution, until retirement. It’s a family, I love it here.

Having been raised on computers, it seems only natural that Aaron Bueg would make a career out of learning more about them. “I was building computers with Dad, back when the first machine was a 486,” Aaron recalls. “I remember putting it together and playing a video game that ran on a floppy disk.” It wasn’t until high school that Aaron begin considering the IT field as a professional option. “My father made a career change from construction to networking,” Aaron recalls. His father completed North Arkansas Community Collegeʼs Cisco program back when the program was first established. “After he got his CCNA, I started working for him and I grew to really like it.”  IT “made sense” to Aaron.

Despite working and enjoying what he was doing with his Dad, Aaron started out at his dad’s alma mater, North Arkansas Community College, majoring in a non-IT field. However, it didn’t feel natural to him, so he eventually made the switch over to the IT program. He remembered well his father’s previous success. Aaron, now, has his A+ Certification.

While still attending North Arkansas, Aaron approached the Director of Micro Computer Services, Rick Williams, to see about getting a job within the school’s IT Department. It took bit of persuading, but after some time Rick finally hired Aaron. Aaron has now been employed with North Arkansas for the past 13 years, currently in the position of Network Administrator. “I worked my way up from a basic tech all the way …to a higher level systems administrator position.” Aaron has found that continuing his education at North Arkansas while working in the IT department has greatly benefited him.

In addition to his growth as an IT professional, Aaron attributes his personal growth to soft skills, “Everyone that knows me knows that I’m a pretty blunt person. I think taking classes and working with some of our instructors has really helped me develop my soft skills as a person and also in a professional level.”

Aaron is now completing his Associate’s of Science in Networking this semester and plans on completing his Bachelor’s of Science in IT in the next 12 months. His long term goals are to continue working at North Arkansas. “I honestly don’t see myself leaving this department or this institution, until retirement. It’s a family, I love it here.”

Posted in BILT (Business and Industry Leadership Team), CCN (Convergence College Network), Convergence Technology, CTC News, CTC Student Feature, Education, Internships, IT Education, Jobs, Video, Working Connections and tagged A+ Certification, Bachelor of Arts in IT, Community College, convergence technology center, ctc, CTC Student Feature, IT Student, North Arkansas
← Have you heard about the “GDPR” and what it means for IT?Social Media: What platform do you use? →