As a part of the National Convergence Technology Center (CTC) featured blogs, we would like to introduce IT students attending our Convergence College Network (CCN) schools. The CCN is a select cohort of community colleges and universities from across the country that connects IT educators with a wealth of resources to enhance their programs. In this month’s IT Student Feature, we’re interviewing Benjamin Cobb, a senior majoring in Information Technology at the University of North Texas (UNT) in Denton, Texas. 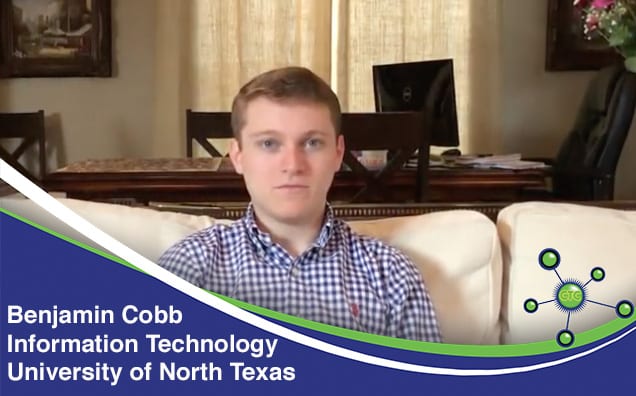 Ben was introduced to computers at a young age and developed a passion for it. “My mom taught computer classes like Word, Excel, Power Point, and that kind of got me into it.” He built his first computer during his freshman year of high school; therefore, it’s no surprise that he would go on to college majoring in technology and excelling in the University of North Texas Capstone Program, a two-semester program that gives students an opportunity to experience working with industry partners and installing real-world systems. The program is required for all BA-IT majors.

During this program, Ben and his team designed a website for the Texas Veterans Association of North Texas’ Hall of Fame.“My team – which is team Atlas – was tasked by the Texas Veteran Association of North Texas with designing a framework, and we built a back end and a front end for that using Angular — a platform for building mobile and desktop web applications — and Spring Boot — an open Source Java framework for micro serves. They were looking to expand; they wanted to make a new website; and they wanted to have forms so that people could submit their own veterans (from other areas) to be a part of the association,” Ben said.

According to Ben, the challenges that he experienced during the Capstone Program was not the technical part but the responsibility of performing outside of a classroom. “In working with this Capstone project, I learned how to work with a group and how to talk to a client. I learned how to take what they want and learn how to do it; where to start; how to start and learn all these different kinds of things on my own.” The team of students didn’t have a lesson plan to follow, however, they were given assignments to stay on schedule. “It is a very difficult process when transitioning from a college lecture hall to a client meeting at a burger bar in Denton. It’s something that has been really good for me to learn.” Ben praised his mentor and professor, David Keathly, and his team for helping him successfully complete the program.

Prior to attending the University of North Texas, Ben attended North Central Texas College (NCTC), a community college in Gainesville, TX. He took his general courses at NCTC and believes that experience better prepared him for UNT; and the Capstone project prepared him for the business world. “Community college had smaller class and more personalized instructions. NCTC prepared me by giving me a good segway between the bigger college classes and the small high school classes, made it a more gradual change.”

Click here to watch the video as Ben shares more of his IT student story.