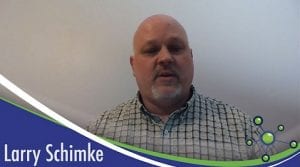 “I got my first computer, which was a Commodore 64, and I haven’t looked back since.”

After retiring from the police department, Larry Schimke felt he was too young to stay retired so he transitioned into the IT world for another career. “I heard about the program at MATC (Milwaukee Area Technical College) because of my wife who actually works there,” Larry explained. “After I took that bit of information that I obtained from her, I then started to explore all of the local schools and what they had to offer.”

Larry found that MATC was the only one to offer more hands-on opportunities for undergraduates than any of the more traditional four-year university options. “I felt there was a lot to gain from that over just reading a book and taking a test.” However, it seems fitting that Larry would decide to pursue the IT field; his interest in computers started at an early age because of an uncle. “I got my first computer, which was a Commodore 64, and I haven’t looked back since.”

MATC broadened Larry’s technical skills and, as a result, he received four certifications in IT. Larry holds a technical diploma for IT Network Specialist as well as certifications in Network Pro, PC Pro, Security Pro and Server 2012 Pro Manage and Administration from TextStyle.com. In addition, he will graduate in the IT networking program this May and transfer over into the networking security side.

Due to Larry’s technical skills and qualifications, he was given the opportunity to go into the private sector. He currently works as a system administrator for SaintA, a non-profit organization. As system administrator, he is responsible for over 350 employees at five locations with multiple networks and a core location for their virtual server farm.

Larry is very grateful for his certifications obtained at MATC, he also says that the program humbled him. “I had initially gone in thinking I had some good knowledge and understanding of the IT world, and it wasn’t until I got there that I realized that there was a lot I didnʼt know. And you donʼt know what you donʼt know until you learn what you donʼt know.”

Larry now plans to pursue a Bachelor in Information Technology and as a result of his experience, he plans to help others by teaching them the things he has learned. “IT is something Iʼve always had a passion for and going to MATC allowed me to fulfill that desire.”